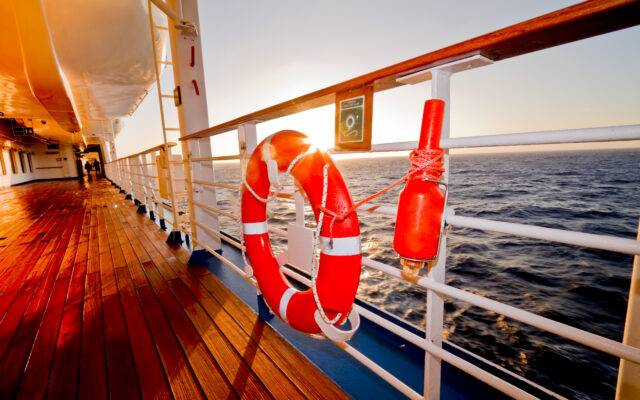 Hanging lifeboat, orange safety beacon and life preserver ring on the railing on the wooden promenade deck of a luxury cruise ship at dusk. Small aperture creates star effect on the sun as it is peaking from behind the life preserver. Boat is on a calm blue sea with no land in sight.

You’ve probably heard this survival tip before:  If you’re lost in the desert, you can get water from a cactus, right?  Well, that’s not actually true.

They do hold moisture, but it’s not drinkable water.  In most cases, trying to suck liquid from a cactus will just make you sick and even more dehydrated.  So you’ll have even less time to find help.  Here are five more bad survival tips that could get you killed . . .

Myth #1:  If you’re attacked by a shark, punch it in the nose.  Their noses aren’t really that sensitive.  You’re better off going for their eyes or gills.

Myth #2:  If your car is sinking in a lake, wait until it’s fully submerged, then open your door.  The idea is you won’t be able to open it until the pressure equalizes, which is true.  But rolling your WINDOW down as soon as possible is a much better strategy.

Myth #3:  If an alligator chases you, run in a zigzag pattern.  The idea is they can’t change direction that fast.  But you should actually just run in a straight line.  Alligators ARE fast runners, but their stamina sucks.  So just don’t fall down.

Myth #4:  If you’re stranded on a desert island, you should build a raft.  You’re actually much more likely to die if you try to leave the island.  You’re better off building a shelter . . . making a big S.O.S. sign in the sand . . . and hoping you get rescued.