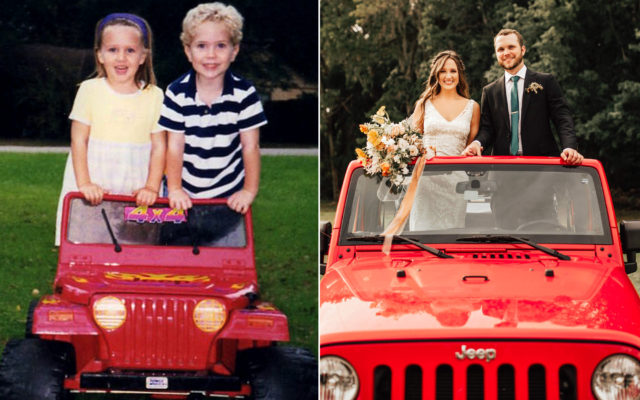 Remember that friend from school you haven’t talked to in a while?  Sometimes reconnecting is worth it . . .

A guy from Florida named Austin Tatman was best friends with a girl named Natalie when they were little kids.

They were constantly together until they were five.  Then she moved to Connecticut.  And for over a decade, they never saw each other or talked.

But then in high school, Natalie tracked Austin down on social media, and they started talking again . . . then started DATING.

Now they’re both 24 years old.  And last month . . . almost seven years after reconnecting . . . they got MARRIED.

They say it only took two dates to realize they really liked each other.  And after that, they were inseparable again.

Their ceremony was at a venue near Daytona Beach.  And in their wedding photos, they recreated an old picture they took as kids.

In the original, they were standing up in Austin’s toy Jeep Wrangler Power Wheel.  So they took the same photo, but in a real Jeep.