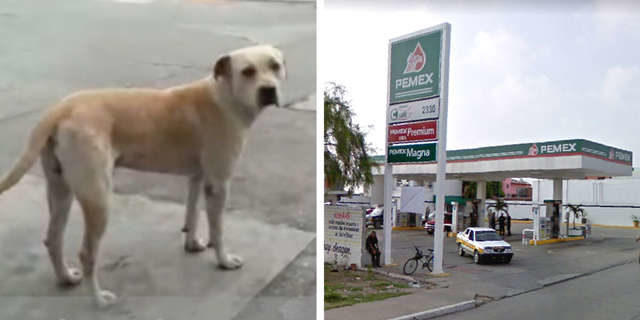 All that money you spend on kibble and vet bills could be more than worth it one day.  Here’s a good example:

About two years ago, employees at a gas station in Mexico noticed a scared, malnourished, stray dog that kept hanging around.  And they decided to adopt him.

He’d been abused, and he was pretty skittish.  But they eventually gave him a bath, got him vaccinated, started feeding him every day, and named him Randy.

Ever since then, he’s been a hit with customers.  Some of them even go there for gas JUST to see the dog.

Anyway, one of the employees was working the night shift earlier this month when two armed ROBBERS showed up and started fighting him.

And he was losing pretty bad until Randy woke up . . . heard them going at it . . . and came charging in to help.

He went after the two robbers and helped fight them off.  So the gas station attendant is okay, and a security camera got it all on video.

The owner says he’s not sure what would have happened if the dog hadn’t been there.  But he thinks it’s pretty clear now that Randy appreciates everything they’ve done for him.