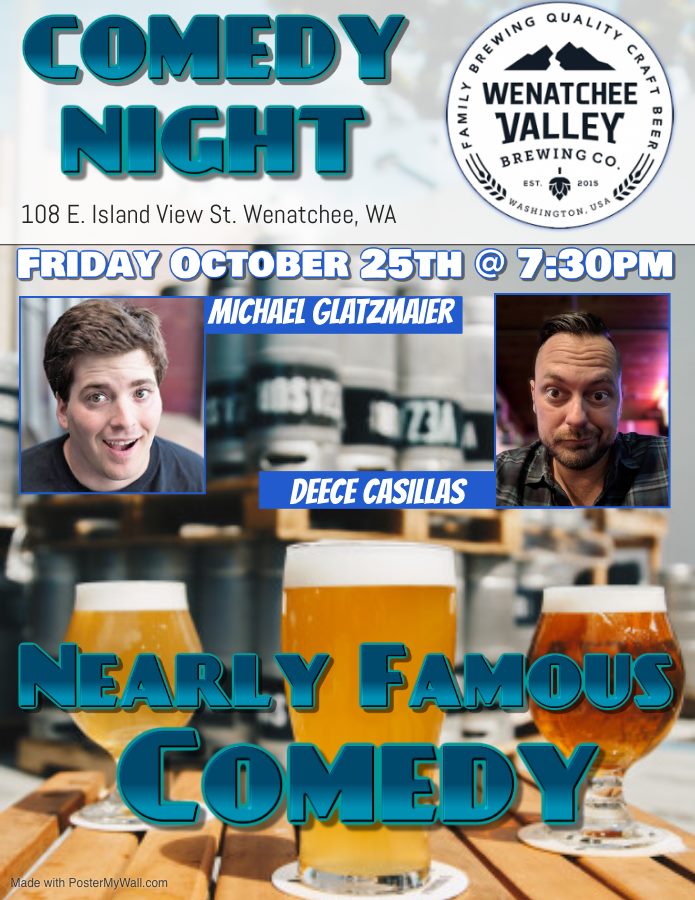 Join The Nearly Famous comedy duo of Michael Glatzmaier and Deece Casillas at Wenatchee Valley Brewing Company. on October 25th at 7:30pm for a night of entertainment. Doors open at 6:30pm and NO COVER!

Michael has been performing his improvised musical stand-up act across the country and Canada for years, performing at Bumbershoot, the Seattle International Comedy Competition, The World Series of Comedy, and more. He recently recorded his first “Mostly Improvised”. Mostly Improvised is a musical comedy act in which suggestions are taken from the audience and then turned into improvised songs on the spot.

A stand-up comic and writer from L.A., Deece has been making his way across the Northwest, bringing his unique brand of cynicism to every town along the way A regular at The Spokane Comedy Club, Tacoma Comedy Club, and Jokers Comedy Club, you can find him doing standup, as well as his monthly shows: The Drink N’ Debate, Comedy Wars, and live talk show, The Social Hour After Dark, and he is also host of the weekly podcast, The Social Hour. He was recently voted Inland NW Best Comic, and selected by Whitney Cummings as her feature act, as well as worked with headliners such as Kevin Smith, Mike Epps, Dan Cummins, Jamie Kennedy, Carlos Mencia, Kyle Kinane, Chad Daniels, and many more.