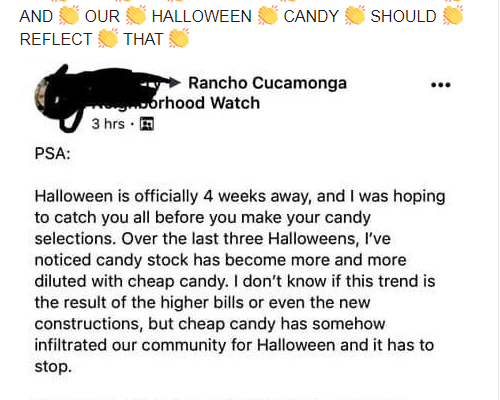 To some people, even Halloween candy is a status symbol.

A woman in Rancho Cucamonga, California recently posted a rant on a neighborhood Facebook page with a message for her neighbors this Halloween.

Quote, “Over the last three Halloweens . . . cheap candy has somehow infiltrated our community and it has to stop.”

She also says that while, quote, “Dum Dums, Smarties, and Jolly Ranchers” might be okay for some other cities nearby, quote, “We are an affluent neighborhood and this status should be reflected in our candy provisions for Halloween.”

So she’s begging her neighbors to start handing out FULL SIZE candy bars, or giving each kid four to six fun size bars.