A Guy Saves a Stranger’s Life Twice by Donating Bone Marrow, Then a Kidney 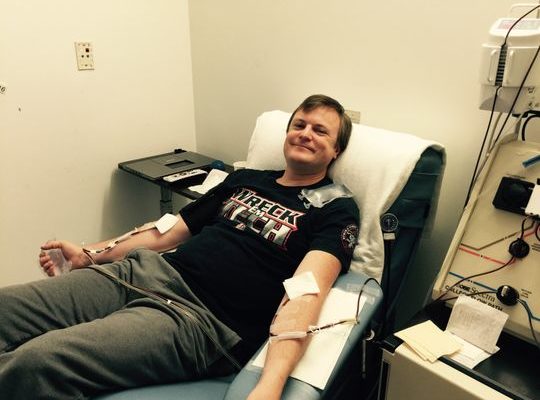 Back in 2010, a guy named Jeramy Davies hosted a bone marrow drive as a student at Texas Tech.  Then five years later, he got a call that he’d matched with a 27-year-old woman who had cancer.  So he decided to donate.

He didn’t find out her name until a year later, then they became friends.  Her name is Kelly Ribeiro, she lives in New Jersey, and Jeramy’s bone marrow saved her life.

Sadly, Jeramy’s wife Laura got sick around that time.  She’d been fighting brain cancer and was in remission.  But then it came back, and she passed away in 2017.

Obviously Jeramy was torn up about it.  But Kelly talked to him a lot and helped him through it.  Then a little over a year ago, he quit his job and went on a road trip to meet her in New Jersey.  And that’s when he found out she was sick AGAIN.

All the chemotherapy had destroyed her kidneys, and she needed a transplant.  So Jeramy stepped up a SECOND TIME to donate.

Since she already had his bone marrow, they were literally a perfect match, like being identical twins.  The kidney transplant happened in December . . . he saved her life AGAIN . . . and they’re both doing great now.

Back when he donated his bone marrow, Jeramy’s wife said it was the proudest she’d ever been of him.  So with that in mind, he says giving Kelly a kidney was an easy choice to make.