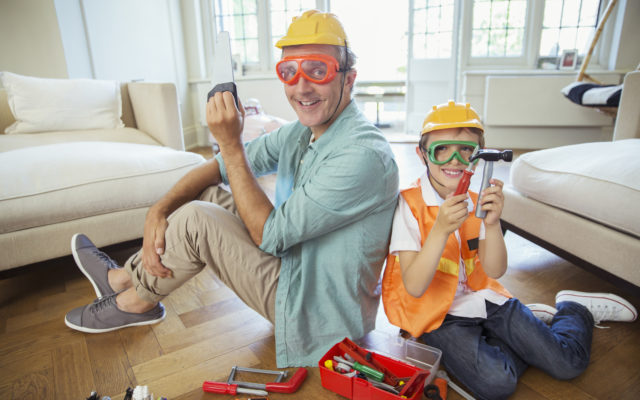 Jeff Pearlman is a sportswriter and blogs at jeffpearlman.com. Back in 2011, around Father’s Day, Jeff shared that he’d been the emotional punching bag for two women who were clearly unhappy in their marriages — unhappy because their husbands weren’t being good dads. That’s when Jeff came up with the 10 commandments of righteous fatherhood.

1. No golf on weekends: Seriously, it’s ludicrous. Your spouse is home with the kids all the time, and you think it’s OK to take five hours on a weekend day to pursue your own pastime?

2. Wake up: Literally, wake up. With your kids. On at least one of the two weekend days — and perhaps both. I know: you wake up early for work. Not even remotely the same thing. Rising alongside the kiddies is hard. And crazy. And (gasp!) sorta fun, if you’d just stop moping.

3. Change diapers: If you have little kids, and you don’t know how to change diapers (or, even worse, refuse to change diapers), you’re pathetic. That’s no exaggeration — p-a-t-h-e-t-i-c. It’s not all that hard, and though the poop sometimes winds up on the fingers, well, uh, yeah. It just does. Wash your hands.

4. Play with dolls and paint your toenails: How many fathers do I know who refuse to get girlish with their girls? Dozens. Dude, put aside the machismo, break out Barbie and slather on some pink polish. You’ll make a friend for life — and nobody else is watching.

5. Do things you don’t want to do: It’s easy to take the kids to the driving range — because you want to be there. Now try spending the day having a tea party, or crawling through one of those wormholes at the nearby kiddie gym. Fun? Often, no. But this isn’t about you.

6. Order the wife to bug off: I recently met a mother who told me her husband hadn’t been alone with their 9-year-old daughter for more than two hours … ever. Inexcusable. Let your wife do her own thing: relax, take a run, whatever. Entertain your children solo. They don’t bite.

7. Surprise! Just once, on a random day without meaning or purpose, show up early at your kid’s school/camp/wherever, say “Get in the car!” and take him/her somewhere special. Just the two of you, alone. A movie. A park. A hike. The memory lasts — I promise.

8. Dishes Don’t Clean Themselves (Nor Do Toys): It’s amazing how this one works. You pick up a dish, run it under hot water with some soap, rub it down with a towel and place it back on the shelf. Then repeat.

9. Wake up your kid: Not often. But if you want to score big points and create a killer memory moment, walk in Junior’s room at, oh, midnight, wake him/her up and go outside for 10 minutes to watch the stars.

10. For God’s sake, tell your kids you love them: They never see you, and they’d probably like to know.