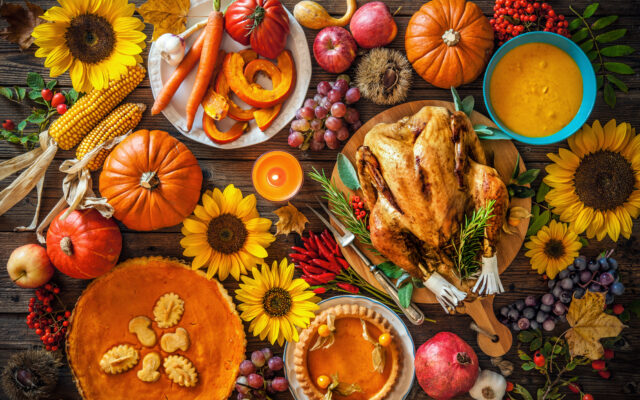 Here are nine Thanksgiving stats for you . . .

1.  More than 5,000 adults were asked for their LEAST favorite Thanksgiving side dish, and candied yams were #1, with 27% of the vote.  Green bean casserole was second, followed by cranberry sauce . . . and sweet potato casserole.

2.  Turkey EGGS are edible . . . and some people say they’re delicious . . . but you won’t see them in stores.  According to “Modern Farmer“, selling turkey eggs doesn’t make sense for farmers, who are already raising the birds for slaughter.

Mature female turkeys lay a maximum of two eggs per week, which means that they’d have to charge at least $3.00 PER EGG to make it worth their while.

4.  A ridiculous list of PRACTICAL gifts to bring to a Thanksgiving includes:  Serving utensils, takeout containers, and TOILET PAPER.  Seriously.

5.  Ocean Spray intentionally fills and labels their cranberry sauce upside down to create an air bubble on the rounded side, which is “the top.”

They say, quote, “That way customers can swipe the edge of the can with a knife to break the vacuum and the log will easily slide out.”  (But did they HAVE to call it a “log”?)

7.  Just a reminder:  There is Thanksgiving dinner-flavored candy corn.  (I haven’t tried it of course, but it doesn’t sound good.)

8.  It’s probably too late now, but the people at QuoteWizard.com have put out a rundown of the RISKIEST states to travel to for Thanksgiving . . . considering things like the number of car accidents, speeding tickets, DUIs, COVID-19 case rates, vaccination rates, and hospital capacity.

10.  Macy’s is turning some of the balloon designs from their Thanksgiving Day parades into NFTs.  And some of them will be auctioned off to benefit the Make-A-Wish foundation.