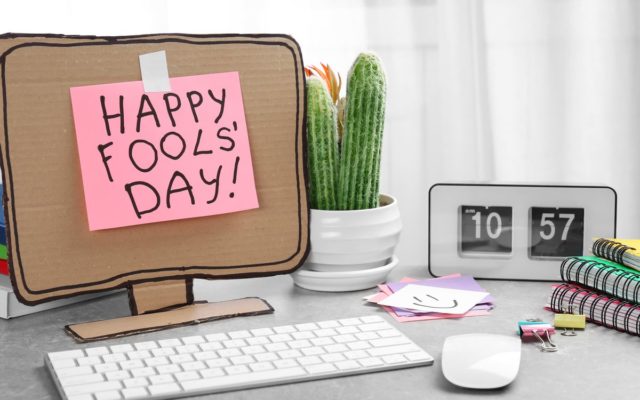 No celebrity had an AWESOME April Fools’ Day prank, but that didn’t stop them from trying.  Here are 10 notable attempts . . .

1.  Justin Bieber thought it would be funny to post a sonogram, implying that he was going to be a father.  But it was a generic photo from Google Images.

He tried to keep the ruse going by posting photos of Hailey Baldwin at the doctor’s office, and he captioned it, quote, “If you thought it was April fools.”  But then he gave up on it.

By the way, Justin drew some BACKLASH from people who either can’t get pregnant or who have suffered a miscarriage.  They don’t think that pregnancy is a joking matter.  Lily Collins also made a pregnancy joke.

2.  Tom Brady thought it would be funny to join Twitter and announce his RETIREMENT.  It was sort of a nod to Rob Gronkowski’s recent retirement announcement on Instagram.  Obviously, Brady was joking.

I’m retiring. In my spare time, I’ll be tweeting #LFG

3.  The Chicago Bears unveiled new jerseys, featuring triple-digit numbers.  They said they’d be wearing them in 2019 to celebrate their 100th season.  They even had a news release, and some players to back them up.  (Here’s video, and here’s where the prank is revealed.)

4.  Jennifer Garner thought it would be funny to say she has a memoir in the pipeline called “Bless Your Heart”.  A lot of her followers got excited, but then she revealed that she was pranking them.  (Here’s her video.)

5.  The Jonas Brothers announced a new song that would “feature” that egg that broke Kylie Jenner’s Instagram record . . . but obviously that’s not happening.

6.  There was a fake report that Billy Corgan was purchasing the name ‘Nirvana‘ from Dave Grohl, Krist Novoselic,Courtney Love, and Frances Bean Cobain for $1 billion.

7.  Tool released some new sounds yesterday . . . 37 minutes of crickets chirping.  And the sound of crickets is all that fans have heard from the band over the past 13 years.

8.  Dr. Phil pretended that he was shaving his iconic mustache, but he didn’t.  (Here’s him revealing that he didn’t do it.)

Well… I did it. pic.twitter.com/hCIOW4jHt8

9.  Katie Couric announced she’s returning to the “Today” show as an anchor, because “America is in desperate need of a sweetheart.”